When searching for VPN apps in the App Store, you will find several alternatives. However, many of them have severe privacy and security flaws. In this guide, you will find the best VPN for iPhone that will unblock Netflix and other geo-restricted apps in addition to protecting your device.

Although iOS is a secure operating system, its vulnerability is growing, which means it is more important than ever to keep it protected. Hacker attacks, most of the time, start with discovering your IP address and can reach all your connected devices.

A good VPN service offers applications for all devices and operating systems. They provide military-grade encryption, the security feature of changing the device’s IP, which keeps Internet traffic secure, and a non-registration policy that prevents the storage of your data.

In addition to security, they offer the possibility to access streaming content released only in other countries, such as American Netflix, with excellent speed and without bandwidth restrictions or server changes.

Therefore, it is crucial to use a secure and reliable VPN. The VPNs we choose are the safest for iPhone, which will succeed in changing the device’s IP, making your Internet traffic anonymous, and accessing streaming services while ignoring geographical restrictions.

Some of the recommended VPNs offer the kill switch, support downloading and sending torrents, and have servers in various parts of the world, including servers available in Europe, North America, South America, Asia, Africa and Oceania, making them indispensable for your iPhone and iPad, especially when you access public wi-fi networks.

There are free VPNs, but obviously, the paid ones offer more features and security. However, most offer a trial period, with a refund guarantee of up to 30 days without risk, just contact customer support.

See the best VPNs for iPhone: 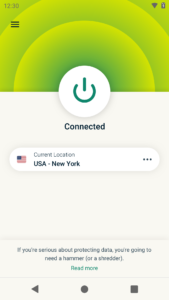 ExpressVPN is the best VPN for all iOS devices, including iPhone and iPad, and it’s super easy to use. This VPN works with the latest iOS software updates on the iPhone, iPad, and even Apple TV. Although it is more expensive than other VPNs, ExpressVPN includes advanced features that make it worth the investment.

ExpressVPN intuitive iOS app couldn’t be more straightforward, even if you’ve never used a VPN before. To activate the VPN, just click on the connection button in the center of the screen. When connected, the app’s top half will glow green to confirm that the VPN tunnel is active.

The VPN subscription comes with access to the Media Streamer for streaming lovers’ sites, ExpressVPN’s Smart DNS service, and Media Streamer allows you to unblock streaming sites on your Apple TV.

If you use Apple Watch, this VPN can be even more interesting because the Apple Watch shares an iPhone network connection, ExpressVPN also encrypts all the watch data.

ExpressVPN is a high-speed VPN for iOS. It has fast and constant speed on all servers, even on long-distance servers.

Some disadvantages prevent ExpressVPN from being the perfect iOS VPN. ExpressVPN, unfortunately, does not have a kill switch on IOS, despite being present on all other platforms. If your VPN disconnects, your actual IP address will be visible. Although we did not experience any drop in the VPN connection during our tests, this is still a severe privacy issue.

The second point is that ExpressVPN is one of the most expensive. However, when comparing all the benefits offered, for example, features like a split tunnel, live chat 24 hours a day, seven days a week, and the best privacy features, it makes ExpressVPN worth the extra cost.

See our guide on how to try ExpressVPN for free for 30 days. 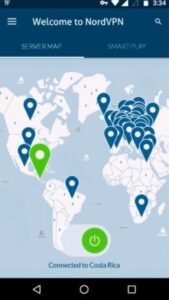 NordVPN is an excellent alternative to iOS VPN. Its applications are full of features and are well integrated with the most advanced features of iOS.

NordVPN is well integrated with iOS. The application works with shortcuts, which is Apple’s integrated automation application. After setup, just ask Siri for “quick-connect,” or you can add the widget to your home screen for quick connections.

The app also detects whether your iPhone or iPad uses light or dark mode and reflects the app’s theme accordingly. You can also enable CyberSec, NordVPN’s DNS-based ad blocker, in the application settings.

NordVPN also has the Smart DNS feature. This feature is the easiest way to unlock TV shows and movies on your Apple TV.

Whether you need a VPN for secure FaceTime calls, unblocking streaming sites, or casual browsing, NordVPN will keep your connections fast and free from interruptions.

NordVPN also comes with advanced security features that will keep your activity on third parties’ private Internet. Most importantly, the app includes an integrated switch to protect your IP address, which not all VPNs offer, and robust encryption. 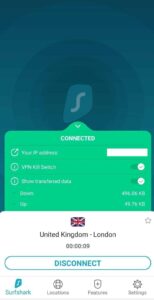 urfshark offers many security features such as AES-256 encryption, OpenVPN protocols, and Wire Guard; kill switch to mask your actual IP address if your VPN connection drops or oscillates.

Besides, this VPN application comes with many extra security features – for example, ad blocking, and malicious URLs, Multi-Hop servers, and more.

Surfshark speed is not the fastest, but even so, it remains a cost-effective VPN. Surfshark is one of the cheapest VPNs on the market, perfect for beginners, and offers unlimited simultaneous connections, a great differentiator.

This VPN is worth testing.

Does an iPhone VPN use mobile data?

Yes, your iOS VPN will use more mobile data than browsing without a VPN. The amount paid can increase between 3% to 18%, but you are investing in your privacy and security online, which in the end will be very worthwhile.

Does a VPN use a lot of iPhone battery?

A VPN will consume your iPhone’s battery, but only slightly. It is mainly because the VPN needs to be connected to a server at all times to encrypt background processes, such as fetching iMessages and syncing iCloud photos.

What services can I access with a VPN on my mobile phone?

Why do I need a VPN for my iPhone?

The VPN can guarantee more security when using the devices by encrypting the data and changing the IP address, which prevents your data from being accessed improperly.

What are the advantages of using a VPN on the iPhone?

Among the advantages, we can mention greater security, data encryption, access content blocked by geographic location, good connection speed, and the possibility to use the service for free during the trial period with a 30-day money-back guarantee.

How to set up and use a VPN on your iPhone or iPad?

What's on this page