Bypassing Netflix’s location restrictions and unblock all TV and movie series, which are only available in some countries, you need to use a VPN service, which can break that restriction by masking your IP. For this, it is essential to know which is the best VPN for Netflix.

This restriction occurs because each country has selected content due to copyright and content licensing agreements. US Netflix has the most extensive catalog globally, with 40% of all titles available worldwide. Each country has its original library, with German films available only in Germany, French films only French Netflix, etc.

VPN providers allow you to access Netflix from the United States, or another country, with complete security. In this way, you will watch a movie or series not available in your current location and without loss of speed.

When traveling abroad, it is possible to use this same resource on several devices, such as notebooks and smartphones, to watch Netflix abroad.

There are free VPNs, but, of course, paid VPNs offer more features and security. However, most VPN companies offer a trial period with a 30-day risk-free money-back guarantee, and you just need to contact customer support to get your money back.

Not all VPNs work with Netflix, so we’ve selected the best VPNs so you’ll be able to watch your favorite shows and movies, and also don’t miss launches available only in other countries.

ExpressVPN is the best VPN for Netflix. It unblocks Netflix on multiple devices at high international speed.

With an integrated speed test tool, you can check the download speed and performance of an ExpressVPN server before connecting. It helps you connect to the server faster for the best possible Netflix experience.

Although it does not have dedicated servers for streaming, the vast majority of the more than 3,000 servers work very well with streaming platforms. Netflix blocks known VPN IP addresses every day, so having thousands of servers in more than 160 locations means that you can connect to a different server if Netflix blocks the one you are using.

All ExpressVPN servers come with unlimited data, which means that you can watch as many programs as you like without reaching the bandwidth limit.

ExpressVPN also works with Netflix on all platforms, including Windows, macOS, Android, iOS, Amazon Fire TV Stick, and routers. You can connect up to five devices simultaneously and unblock up to 19 Netflix libraries.

You will also be able to unblock Netflix on devices that do not directly support VPN applications, such as Apple TV, game console, and Smart TV. It is thanks to the Media Streamer Smart DNS feature offered by ExpressVPN.

There is also a native app for Amazon Fire TV that gives access to VPN servers in 94 countries and several advanced security features, including a VPN elimination switch and split tunnel.

This VPN is simple to install and easy to use, ideal for beginners who are not familiar with VPNs. It also provides strong AES-256 encryption and excellent security features, such as Kill Switch, for added security and privacy.

ExpressVPN is more expensive than other services, but it is worth its speed and reliability during streaming. However, you can test the service for 30 days and request a refund without any headaches.

Although more expensive than the other VPNs, ExpressVPN is the best VPN for Netflix and perfect for streaming in general. It easily circumvents the geographical restrictions of Netflix and other streaming services, such as Amazon Prime Video, Disney +, and Hulu.

However, ExpressVPN is the best VPN for Netflix, as it offers a VPN service. In addition to security and privacy, it is easy to use, super-fast, and quickly unblocks American Netflix on all your devices.

See our blog post on how to get ExpressVPN free for 30 days.

Which Netflix libraries does ExpressVPN unblock?

The Surfshark allows you access Netflix 15 libraries with fast speeds, at a super low price, only US$ 2.49 per month two-year subscription plan.

Our speeds remained fast enough for Netflix when connected to nearby VPN servers and over long-distance connections.

Surfshark has an extensive network of more than 3,200 servers in 66 countries. Although it does not provide servers specifically optimized for streaming, most servers work with most streaming sites.

It means that if you access Netflix from a VPN server location that does not support streaming, Surfshark will automatically direct you to the U.S. Netflix library. It is a great feature that allows you to watch American Netflix while connected to a server closest to you – minimizing any loss of speed and keeping your Netflix without streaming buffer.

The Surfshark is also effective in streaming Netflix content with geographic restrictions on TVs. The Surfshark has a native application for Amazon Fire TV and Smart DNS to unblock Netflix on Apple TV and game consoles.

However, Surfshark is one of the best VPNs to stream Netflix on your smartphone, tablet, or desktop. It provides quick and consistent access to Netflix’s top 15 libraries, support for Firestick and Apple TV for just $ 2.49 a month over the two-year plan.

Which Netflix libraries does Surfshark unblock?

The Surfshark Netflix does not release only in America. Our tests have shown that it works with 15 other Netflix catalogs, including USA, UK, Australia, Singapore, Italy, South Korea, Canada, Japan, Norway, Poland, India, and Portugal.
VISIT SURFSHARK

How to watch Netflix with a VPN?

The VPN for Netflix allows you to have a secure connection preventing your data from being stolen and improving the internet’s speed when watching your favorite series and movies. Besides, it allows you to access the content catalog of other countries and increase the available content.

Depending on where you are in the world, a VPN will give you access to more than 4,000 movies and 2,000 TV shows. That’s almost three times as many titles as a Netflix library alone.

Watching American Netflix, e.g., in Brazil, it is necessary to choose a VPN with a server in the United States that connects through it. After that, just log in normally to the streaming service.

Your Netflix subscription works in all countries, so you can use your existing account details to view the complete catalog for the other country you’re connected to without buying additional subscriptions.

How to use a VPN with Netflix?

OUR TEAM TIP: Netflix originals, like After Life and The Crown, are available at all locations. You do not need to have your VPN turned on to access them.

How to find out which country has a Netflix movie or TV show?

To find out which Netflix catalog has the content you want, we recommend that you use uNoGS. uNoGS is a service that tells you in which country the Netflix library contains any movie or TV show you search for.

Once you know where the TV show or movie you want to watch is located, just connect to a VPN server in the country where the show is shown.

How does Netflix block VPN traffic?

Netflix blocks VPNs by restricting access to any IP address that belongs to a VPN service. If you are using an IP address known to belong to a VPN server, Netflix will prevent you from accessing any non-original content and display the infamous proxy error code M7111-5059. 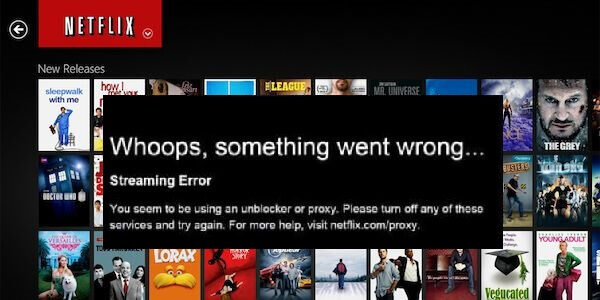 The Netflix proxy error message is very common because its sophisticated VPN detection techniques effectively identify when users are using a VPN so that only the best VPNs are successful.

Netflix blocks VPNs because they allow users to bypass territorial licensing agreements the company has with content providers.

How to watch Netflix from the United States from abroad?

Best of all, you can use the Netflix account you already have to access Netflix catalogs with the VPN.

What is the best free VPN for Netflix?

Almost all free VPNs do not work with Netflix. Being able to get around Netflix’s VPN ban requires a considerable amount of resources, and nearly all free VPNs simply can’t stay ahead of the curve.

The free VPN services that work with Netflix do so in a minimal way. Netflix eventually identifies most, and the rest limit the amount of data you can use before upgrading. The best solution for you, who are on a tight budget, would be to subscribe to the cheapest VPN that is perfect for use with Netflix, which is the Surfshark, or enjoy the best VPN for Netflix for 30 days and request a refund, see here how it works.

Is it legal to use a VPN with Netflix?

It is legal to use a VPN with Netflix. No law prevents Netflix users from using a VPN to access different international catalogs, so no risk watching Netflix with a VPN will result in any form of legal penalty.

Many users fear that by  circumventing geographical content restrictions, they are somehow committing an act of piracy. Piracy is illegal because it allows people to access copyrighted material they did not pay for, but using a VPN with Netflix, you are still paying for the Netflix subscription.

How do I ignore the Netflix proxy error?

If you are using a VPN with Netflix and encounter the “proxy error” message, follow the steps below:

Use one of the VPNs that we recommend – this should be enough to avoid the streaming error message.
If you’re still having trouble accessing Netflix, connect to several different VPN servers in the same country. If you still can’t access Netflix, just contact VPN customer service. They will quickly tell you which servers are working for Netflix.

What is Smart DNS?

Smart DNS is a technology that allows you to change your location and access Netflix libraries restricted by region on devices that are not compatible with VPN. Smart DNS will work with Apple TV, smart TVs, and game consoles.

All VPNs in this guide include Smart DNS in their subscription.

Unlike a VPN, Smart DNS technology does not encrypt your online traffic – leaving your activity exposed to your ISP and other third parties. It is okay if you are using smart DNS only to access Netflix libraries, but make sure you connect to a full VPN service for everything else.

To learn how to configure Smart DNS, search for your specific device’s instructions on your chosen VPN provider’s website or contact the support team.

Can I unblock Netflix on Apple TV?

All you have to do is replace your Apple TV’s DNS address with the new one for your VPN service.

However, there is a drawback: Smart DNS can only unblock Netflix from the U.S. and the UK.

It will allow you to have access to most Netflix movies and TV shows you need, but if you want even more on your Apple TV, you will need to install a VPN on your existing router.

Can I unblock Netflix by configuring a VPN on a router?

Yes, configuring your router with VPN is a very effective method to unblock Netflix. It will allow you to cast Netflix on devices that do not support VPNs, such as a Chromecast or PS4.

How do I access American Netflix on my phone?

How to use Brazilian, French, Spanish or UK Netflix abroad?

After installing the VPN on the device, just select a server in Brazil, France, Spain or UK to identify your IP. With the location changed, you will be in the country and have access to the countries catalog.

What's on this page